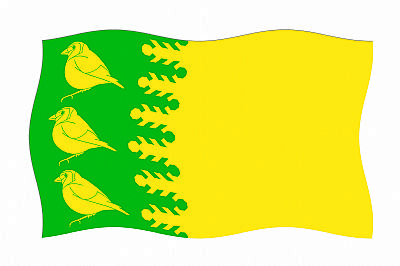 The flag design were done by children at Uplands Junior School and Bhylls Acre Primary School after a session led by Philip Tibbet, who is a flag designer. The FCA Committee then decided on a short list of 4 based on the 6 concepts  drafted into designs by Philip. These designs were then voted on and the winner was the three finches in gold on a green background, which links with a gold field of corn.

Philip Tibbett explains: “A distinctive design that utilises a field division between the green and gold sections of the flag to emphasize the importance of agriculture to the heritage of Finchfield. The field division has been crafted to look like wheat growing backwards and forwards. The yellow denotes the original fields of wheat and other cereals from the old Finchfield Farm. The green represents the modern fields, environment centre and the Staffordshire border that make Finchfield so unique and special now. The three Goldfinches are placed on the hoist side of the flag - a position of honour - and this denotes the hoist side of the field to be green”.

The Finchfield Flag is listed on the Flag Institute site